In addition to his executive positions, Mr Beyrer held a number of non-executive board functions in various Austrian industrial companies and was a member of the non-executive board of the Austrian Central Bank. Mr Beyrer read law and Commercial Sciences in Vienna, graduating in Law at the University of Vienna. Later he completed postgraduate studies in European law at the Danube University in Krems (Austria) and the Stanford Executive Program at the Graduate School of Business at Stanford University. Mr Beyrer is married with two children.

What do you think will be the impact of Covid-19 on the EU economy over the next year?

This is an unprecedented crisis and the economic downturn will outweigh the financial crisis in 2008. Our analysis is that GDP will fall by 7.9% in 2020, and rebound with 5.8% growth in 2021.

All sectors will be hit by the crisis. Whilst a small minority of sectors, particularly around IT, medical and Personal Protective Equipment supplies are seeing increases in demand, even sectors which are able to continue during the crisis are likely to see falls in demand in the longer-term as peoples’ incomes are lower than we would otherwise have expected, and taxes rise to pay for these necessary emergency measures.

The crisis is having the biggest impact on consumer facing industries such as restaurants and airlines. Complex value chains are the ones suffering due to both the shutdown measures and the closure of borders. Take for example the automotive industry, aluminium and steel. But also construction, airlines, tourism are all heavily affected. Take food production, from distorted demand to export bans and unavailability of work force, like seasonal workers for harvesting. Take the transport sector and logistics and many other sectors. They’re all hit substantially by this crisis.

Moreover, even once restrictions on activity are removed, it will take some time for our economies to return to their previous levels. Our ability to bounce back is likely to be reduced significantly the longer the restrictions continue and more businesses are forced to close or lay off workers, despite the best efforts of all. A quick return to full capacity will be particularly difficult in cases where it was necessary to close-down industrial plants, given the potential damage to supply chains from a long shut-down.

How will governments in the EU manage to shore up their economies and deal with declining tax revenues and ballooning debt?

We need to redouble our efforts to increase growth and employment if we are to find a way to strengthen our public finances whilst maintaining high standards of public services. Any efforts to significantly raise tax levels carries the risk of being counterproductive if they reduce incentives for investment, entrepreneurship or work.

Action at EU level needs to be accompanied by reforms by Member States. BusinessEurope’s Annual Reform Barometer has consistently shown that whilst EU country-specific reform recommendations focus on the right reform objectives, levels of reform implementation in Member States have been unsatisfactory. Our 2020 Reform Barometer shows that only 13% of the recommendations have been implemented appropriately according to our members.

Now, more than ever is the time to deliver on our long-held aspiration to ensure the EU really is the best place in the world to start and expand a business which is able to deliver high quality job opportunities for all, whilst simultaneously decreasing carbon emissions.

We need to relaunch the European Semester, with a new focus on implementation, including ensuring that all EU support for Member States’ public borrowing is accompanied by a commitment by Member States to implement sustainable growth and employment enhancing structural reforms.

What in your view does industry need right now to get through the difficulties it faces now and in the coming months?

We have seen unprecedented economic policy action at both EU and national in support of the crisis. This is what businesses urgently need. At EU level, this includes the Commission’s €37 billion Euros emergency response fund, the development of the Commission’s SURE scheme to support short-time working and strong action to support financial stability by the ECB, while Member States add support schemes as well.

We need to ensure that the support we give to our companies and workers matches that provided by other large economies, so that we don’t fall behind and damage our vital business infrastructure.

We have asked governments and, where possible the EU, to provide clear exit plans to businesses, including regarding how they can ensure health and safety in the work place, in addition to financial support. But it is difficult to predict how the virus will develop.

We hope we can reopen our economies in a way that avoids a second wave and the need for bringing back lockdown measures. This is why it is important everybody acts responsibly in following the rules.

However, if a second wave is to come, we cannot afford a second shutdown and need to ensure that the EU Single Market is not blocked, as it was the case with this wave.

Governments need to realize that closing the border without coordination, banning exports, making diverse preferential conditions actually damage the very people that they want to protect because of the way the value chains are organised across the Single Market.

BusinessEurope already made a proposal for a European Economic Recovery Plan. The plan should be based on 4 pillars, which together create a regulatory and fiscal environment for businesses that enables them to invest, grow and create jobs:

At the same time, Europe must prepare for the rebound, and collectively, transform the current crisis into opportunities for our continent. At BusinessEurope, we are convinced that we must make every effort to bounce back quickly and get out of the crisis stronger together.

This implies first of all following a clear course of action around three main principles:

How have companies in many sectors stepped up their efforts to contribute to the fight against COVID 19?

Many companies have adapted their production processes to this crisis and provide for urgent needs. Companies from the textile sector have switched production and provide masks. Distillers in Europe produce hand sanitizer liquids and disinfectants and pharmaceutical companies ship corona test kits worldwide. Companies increased production of protective equipment and essential medical products. And many companies have introduced short-time work. This has allowed them to prevent massive damage or bankruptcy. At the same time many companies and millions of workers have stepped up security measures and produce food and other essential goods for our daily life throughout the crisis, while stepping-up protection and adapting work schemes.

Already before the lockdown digital technologies more and more found their way in our work life. However, the lockdown and the sudden global telework reality has definitely been a boost in this regard and, while some aspects needed some adaptation time, other solutions have also positively impacted the way we work, e.g. shared documents or easier participation to discussions also for participants who cannot always travel to join meetings in person. Having said this, personal contacts are very important in our area of work and cannot always be replaced by videoconferences, be it for building trustful working relations, but also for creating a good ambiance for negotiations. So meeting people is definitely something I am looking forward to doing again, but at the same time I am sure that we will integrate the positive experiences we have had with videoconference systems and telework also when we gradually and slowly move back to normal. 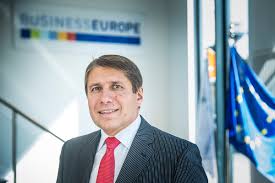